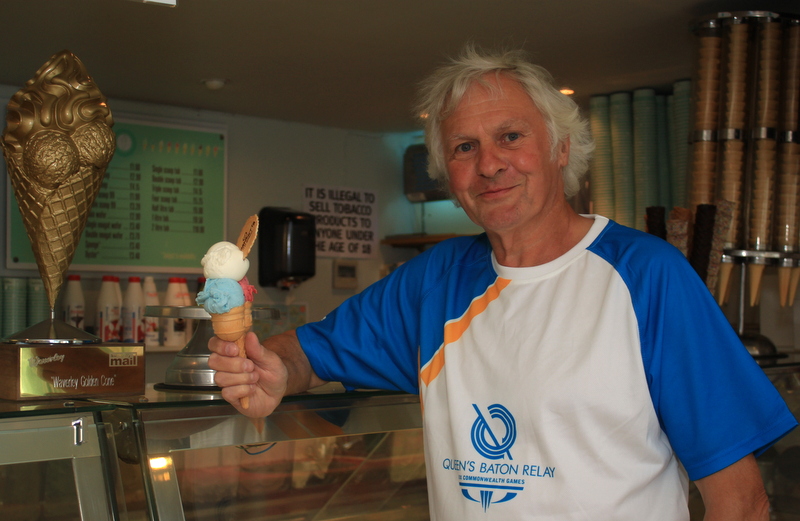 Father and grandfather Mr Bennison (67), who is well-known for his coaching in local primary schools and his athletic prowess, unveiled the triple red, white and blue ice-cream cone to celebrate the arrival of the Baton in the Fife town.

The colourful creation, which was made within the Jannettas Gelateria premises alongside the shop’s vast array of other flavours, combines blackberry sorbet (red), vanilla (white) and blueberry (blue) and will be available until Sunday 29 June 2014 at the special price of £3 for three scoops.

Owen Hazel, Jannettas Gelateria owner said, “The Queen’s Baton Relay arriving in St Andrews is an exciting event for the town and we thought it would be fitting to create our own delicious Commonwealth-themed cone, not only to mark the day itself but the significance of the games themselves which are guaranteed to enthral communities throughout Scotland and further afield. Graham Bennison is a local athlete who, due to decades of commitment encouraging and building on local youngsters’ talent, thoroughly deserves to be part of the relay celebrations.”

The Batonbearers were selected as part of the public nomination processes in recognition of the great work they do in the local community as well as local High School pupils. The Batonbearers in St Andrews are Sophie Pettegree, Kim Carr, Noel Grimshaw, Rosie Hazell, Sherree Rennie, Andrew Gill, Graham Bennison, Eleanor Gunstone, Aidan Harrison, David Adam and Holly Cram.