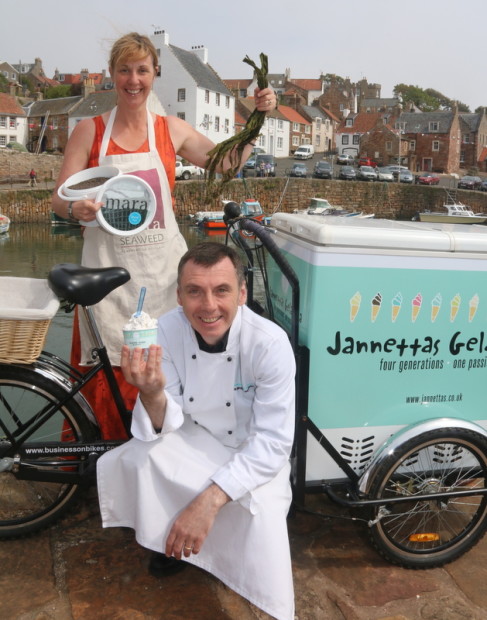 The innovative ice-cream is made from Shony, a unique blend of seaweeds hand-harvested by Mara Seaweed from the seabed around Crail.

Developed jointly by Jannettas Gelateria in St Andrews and Mara Seaweed, the ice-cream will be sold during the annual festival, which runs from 12-14 June 2015.

Owen Hazel, Co-owner of Jannettas Gelateria commented, “We’ve created a new ice-cream, combining lemon and Mara’s Shony blend, enhancing the taste of the lemon. Being in the food industry, we are passionate about food and where it comes from. When Crail Food Festival approached us with the idea of collaborating with Mara, we thought it was a fantastic idea. It has been a fun challenge to see how we could combine the flavours. It has been great working with Mara and we believe it highlights how local food producers can come together and showcase the very best of Scottish produce, particularly during this landmark year of Food and Drink.  If the Shony seaweed ice-cream is a hit during the festival, we may sell it within our St Andrews Gelateria and further afield.”

Fiona Houston, CEO and Co-Founder of Mara said, “Our Shony blend – which has won Gold Taste awards for two years in a row – is an intriguing mix of sweet and salty seaweeds, that can be used in sweet and savoury dishes. We first combined Shony with lemon when Paul Hollywood came to visit us in Crail and we made him a Shony and lemon polenta cake, which he described as “inexplicably delicious” and then went on to feature on his BBC “Pies and Puds” show. It has been great fun working with Jannettas, as I have been a huge fan of their ice-cream ever since my school days.”

“We have developed our harvesting base in the East Neuk of Fife since 2011, and the seaweeds in the Shony blend are all sustainably hand-harvested by Mara harvesters under Crown Estate licence in the East Neuk, and slowly dried to retain flavour.  Seaweed has been traditionally harvested around the coastline of Scotland for centuries and Mara is reviving what is a valued ancient tradition.”

Graham Anderson, Founder of Crail Food Festival added, “Our festival is five years old this year and what delights me is the enthusiasm and support for our event shown by the food and drink producers within Fife. We have more venues this weekend, new themes and returning favourites such as our cookery theatre and  iconic Sunday lunch at the harbour. There are plenty of foodie sessions on both days and it should be relaxed enough, with time to stroll between venues and maybe grab a seaweed cone on the way!”

Food and drink lovers are anticipating a true banquet at the Crail Food Festival 2015 with a programme that includes a unique chocolate larder, a series of street food pop-ups, producers’ markets, top chefs including Michelin-starred Geoffrey Smeddle, and the iconic lunch at the harbour festival.  Crail Food Festival is supported by EventScotland, the events team at VisitScotland through the National Programme as part of the Year of Food and Drink.

The festival, which is in its fifth year, brings the picturesque Fife coastal village alive with a full weekend of activities designed to showcase the very best in outstanding local produce with over 80 participants taking part.

The weekend will start with a dinner and film night celebrating local Fife producers on Friday evening and on Saturday and Sunday, Crail Food Festival will be in full swing across a number of different venues.  Advance tickets and reservations can be purchased on crailfoodfest.co.uk or 0871 220 01260.

Jannettas is open between 9am and 10pm, seven days a week – www.jannettas.co.uk.