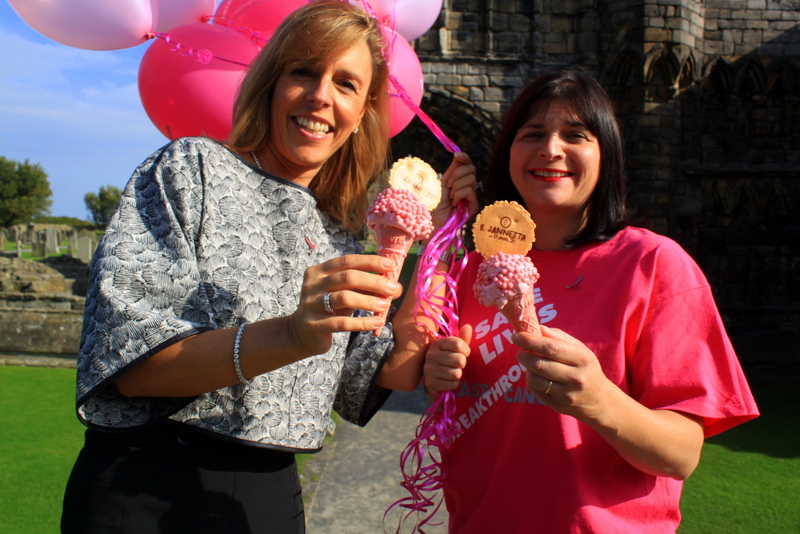 Both Waverley and Jannettas will be fundraising and raising awareness for Breakthrough Breast Cancer through the sale of the cones, with Jannettas selling a ‘pink cone’ containing their home-made strawberry gelato.

As the UK’s leading breast cancer charity, Breakthrough Breast Cancer is dedicated to saving lives through improving early diagnosis, developing new treatments and preventing all types of the disease.

Nicola Hazel, co-owner, Jannettas Gelateria said, “Because my mother, Fiona Jannetta De Angelis, the former owner of Jannettas, sadly died from breast cancer 16 years ago, this is a cause which is genuinely close to our hearts.  We thought that creating a pink cone would be a wonderful tribute to her, as well as raising much-needed funds for ongoing research into a disease which affects so many families.”

Nadia Millar, Managing Director of The Waverley Bakery said, “Breakthrough Breast Cancer is such a fantastic charity and it is really making a difference to the lives of those suffering with the disease. We have created this pink cone, which is the first of its kind, as a way of increasing awareness during Breast Cancer Awareness month and raising as much money as possible for such a worthy cause.  We are delighted to be able to lend our support and hope as many people as possible get behind this great initiative.”

The Waverley Bakery was a family owned company which can trace its Scottish/Italian roots back to 1908, and was acquired in 2003 by Lees Foods.

The need for Breakthrough Breast Cancer’s work has never been greater. Breast cancer is still the most commonly diagnosed cancer in Scotland, affecting over 4,500 women and killing 1,000 every year.  The charity funds 25% of the breast cancer research in the UK, campaigns to ensure survival rates are among the best in the world and educates women to recognise the signs and symptoms of the disease.

Victoria Sampson, Fundraising Executive, Breakthrough Breast Cancer added, “We wish Jannettas every success with their fundraising during Breast Cancer Awareness Month and hope that the residents of St Andrews, and its many visitors, come out in force to support them. It’s a sad fact that breast cancer is still the most commonly diagnosed cancer in Scotland, killing 1,000 women every year. Everyone at Breakthrough Breast Cancer is dedicated to ensuring that more women survive breast cancer; but we cannot continue our vital work without the help of inspiring supporters like Jannettas.”

The pink cones are for sale at Jannettas Gelateria, South Street, St Andrews throughout the month of October.  Jannettas is open between 9am and 10pm, seven days a week –www.jannettas.co.uk.