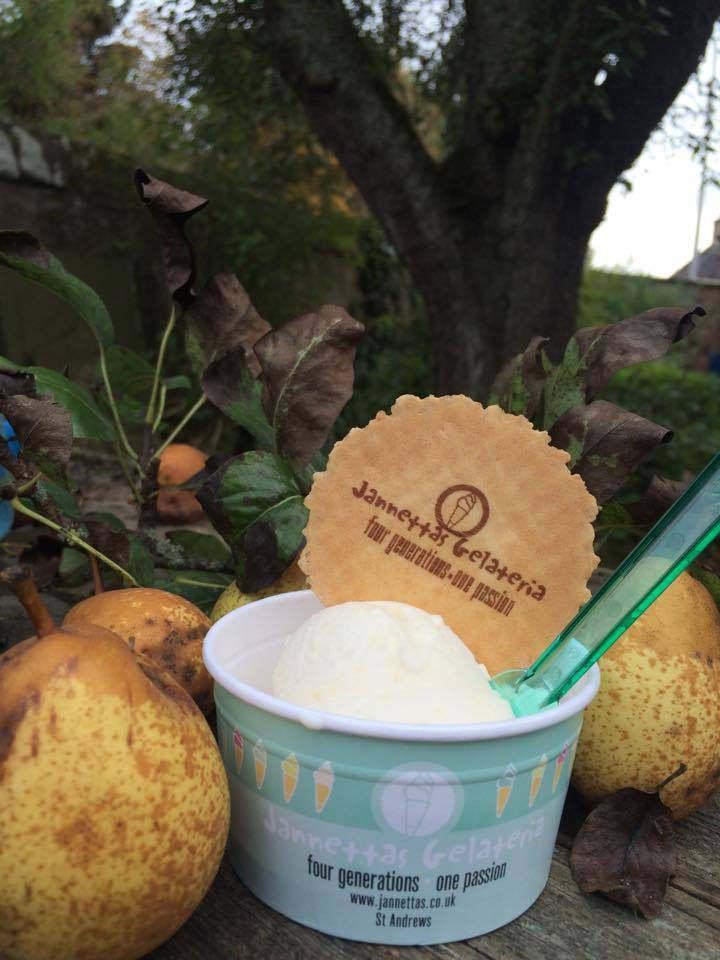 A social media appeal to track down Fife-grown pears for an autumnal new Jannettas Gelateria ice-cream has unearthed an ancient pear tree with the same name as the Jannettas family!

The St Andrews family business had issued a call-out for owners of pear trees and, after receiving a recommendation of one near Cupar, rang the owner’s bell to discuss the huge, ancient fruit tree growing in his garden.

It then transpired through talks with the owner, Dan Cookson, that the tree was planted around the same time as the house was built in 1835.  However, Jannettas was also keen to discover the type of pear growing on the tree so they approached St Andrews Botanic Garden to help investigate.

Their horticulturist Kirsty Wilson established that it is a Hessle (or ‘Hazel’), a pear bred around 1824, marrying up precisely with the age of the house.

Kirsty said, “Hessle was also known as the Hazel pear. Its name connects it with the Yorkshire town of Hessle, now a suburb of Hull.  It’s a very hardy, northern desert pear, and will thrive in almost any situation which is why it has managed to survive for all of these years on this ancient pear tree here in Fife. The fruit is juicy and sweet and should make a wonderful ice-cream.”

Having created a trial version of the recipe for Mr Cookson to sample, Jannettas will now work on perfecting the ice-cream and produce the final product with the fruits from the tree next Autumn. Jannettas has already decided to call it ‘Blairneuk’ after the name of the house and garden from where the pears originate.

Dan commented, “I was absolutely delighted to get the knock on the door, and to share our enthusiasm for the tree with such a reputable local business.  We’ve been here around 20 years and love the pear tree but, despite making a pear crumble every Sunday, we can’t eat them all, so it’s fantastic to know that they won’t go to waste.”

Owen Hazel, co-owner, Jannettas Gelateria added, “We place huge emphasis on tapping into local ingredients for our many flavours of ice-cream so we were thrilled when this ancient pear tree came to light just a few minutes’ drive away! As Winter approaches, we’ll have to wait a little longer to produce the final version but the first batch we created certainly met with the Cooksons’ expectations and we can’t wait to see the pears which the tree yields next year!”